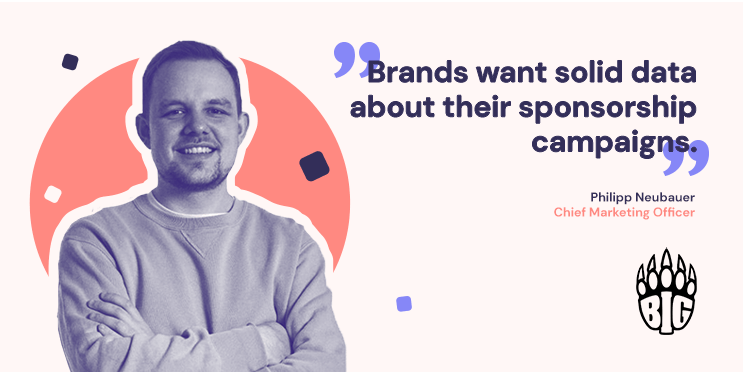 We had the pleasure of sitting down with Philipp Neubauer to talk us through streaming at BIG Clan, a Berlin based esports organisation founded in 2017 with rosters spanning across games such as Valorant, CS:GO and League of Legends. BIG's CS:GO team is currently placed first in global rankings.

Philipp, CMO at BIG, has vast experience in content production and worked for SK-Gaming & mousesports before. Having joined RoomOnFire as a Creative Director in 2016 he was nominated “Videographer of the year” for the Esports Industry Awards 2017 and 2018.

Jakub Janaszek: How many streamers do you have at BIG right now?

Philipp Neubauer: We have 22 streamers, many of whom are professional players, others are streamers for BIG who we market as an agency.

Have you noticed any differences in collaboration between these 2 types of streamers?

Pro players stream whenever they can or when they want to stream – for other streamers it is their job, main focus in life and what they wanna do.

In Germany, audiences appreciate when pro players stream as they love that kind of engagement. However, if you look at our CS team they do not stream that much during intense tournaments; tabseN streams only when he doesn’t have to prepare strategies with the coach, however, XANTARES and k1to can stream often because they are not as involved in strategy talks or analysis.

Are you planning on expanding your network of streamers in the near future?

Yes, absolutely. We have Dathrix, who’s a full time German streamer and is fastly growing, currently he attracts in excess of 100 viewers. We are looking to get streamers with great potential as it becomes increasingly manageable with Streamcoi. Managing streamers is always a lot of work and if you gotta do certain things 3-4 times with each streamer it becomes very time consuming.

You started using Streamcoi a while back to help you manage your streamer roster. Can you tell us a little about the rationale behind such a decision?

Our streamer roster is growing as we see a large potential in it. For us, Streamcoi serves two main purposes: to ensure our pro player streamers have all partners visible on their stream in an appealing way and that our agency streamers manage their commitments to the partners we brought to them, so that we can make sure they reach their goals.

What do your partners pay the most attention to when running a campaign through BIG supported by Streamcoi?

Until now, we could only provide general numbers pertaining to a campaign with a streamer. We notice a significant difference in the way we can report the results of our campaigns with Streamcoi - as an example, we had 800k+ views on one of our partner’s campaigns and their animations.

Brands really appreciate when we can finally say “yeah, we do 500k hours watched per month but this is how much relates to your brand only”. They enjoy this level of reporting, which is even cooler when we can show them impressive CTR [CTR (click-through rate) = number of clicks / number of views]

Can you expand on CTRs?

CTR increases vastly if we optimise the wording and the animation – we want to get to at least 1% or higher, as in the case of the Netflix campaign where we observed CTRs of 7%. Also, what really helps CTRs is working with a group of smaller streamers - smaller audiences can easily engage with the artwork and links on stream as the chat isn’t scrolling as fast!

In all of your experiences with Streamcoi, what is the hardest part about using this tool?

Honestly? It’s pretty simple so I cannot fault the tool itself. Probably to find a cool animation to use with the tool. In the beginning we did basic animations – we quickly saw that new animations like the Volvic campaign require pooling quite a few resources and some creative minds to get those delivered.

Though it has shown that putting in that work pays off massively!

K What’s the most challenging aspect of collaborating with streamers?

Probably keeping their streams up to date – we act as an agency and need to make sure partners are happy with the individuals that represent their interests. In addition to that I guess it would be creating engaging, interactive content that will be appreciated equally on-stream by viewers, streamers as well as our partners.